The Watershed Modeling System (WMS) was developed at Brigham Young University's Environmental Modeling Research Lab (EMRL) in cooperation with the US Army Corps of Engineers to peform a variety of GIS operations in support of hydrologic modeling. It provides interfaces to many commonly used hydrologic models, including CE-QUAL-W2. It's strength is in processing a variety of digital elevation data forms to create CE-QUAL-W2 bathymetry files. 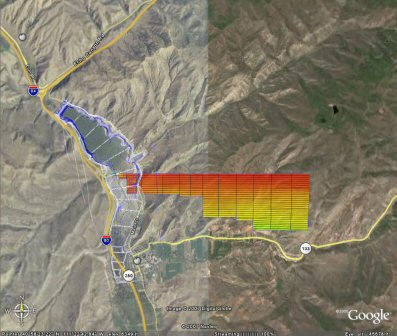 A W2 bathymetry file is comprised of a laterally averaged two-dimensional grid defined by segment lengths in the longitudinal direction and layer widths to discretize the vertical direction. The most difficult and time consuming values to determine however are the "average" widths for each of the grid cells. WMS's strength is in using a conceptual model of segments and layers in conjunction with a digital elevation file of the water body bathymetry to determine the average widths for a W2 grid. 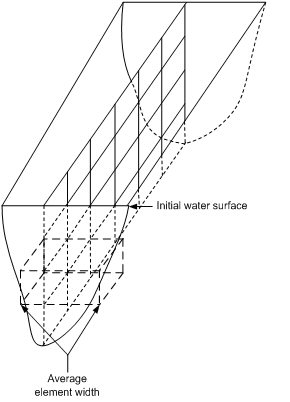 Using the conceptual modeling approach in WMS a set of branch and segment polygons is defined that covers or overlaps the digital representation of the bathymetric elevations. Segement lengths are determined from the natural flow within the reservoir (the underlying main channel) and then for each segment a storage capacity curve is generated which defines the relationship of depth vs storage volume within each segment. With individual segment storage capacity curves defined any increment of layer depth can be chosen and subsequent cell widths computed as shown in the figure below. The advantage of this approach is that the CE-QUAL-W2 bathymetry file represents the actual detail of the reservoir. Further, the ability to redefine segment or layer sizes and regenerate the W2 bathymetric data is simple and allows for multiple iterations on grid refinement to match modeling needs. Formerly the process of measuring widths from contours or other tedious methods restricted the ability to modify a grid even when preliminary modeling results dictated a change. 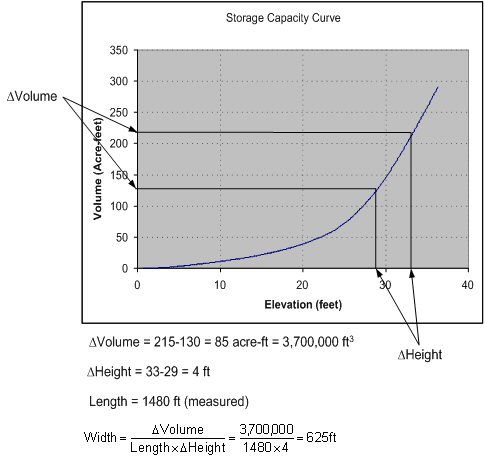 The key to generating W2 bathymetric data for a laterally averaged grid using WMS then is obtaining a reasonable representation of the bathymetric elevations from which a conceptual model as illustrated above can be generated. In all cases WMS uses a triangulated irregular network, or TIN, to represent the elevations, but such a TIN can be derived from one (or a combination) of the following sources.

WMS includes many geo-processing tools to manipulate data from these sources into a TIN that is adequate for generating the W2 conceptual model and ultimately an accurate bathymetry file.

WMS has a wide range of options for post processing numerical models. The specific tools for w2 models are limited, and the AGPMprogram provides more custom tools for plotting and reporting. However W2 results files can be loaded into WMS and animations generated that illustrate how any of the water quality parameters computed are affected over time.